Growing Up With Mickey

He keeps getting cuter and cuter!

Mickey is going to have to sit in his lap soon!

Amy wrote:He's got such a mischievous look on his face in this picture ~ he is getting so big. Time for a bigger Mickey!

He has a bigger Mickey in his closet...waiting on his 2nd Birthday.

I bet he will be excited for a new and bigger friend! Does he carry this current one around and play with it very much?
Top

His Mickey stays in his bed during the day. He has a Woody and Buzz that he plays with most of the time...and some Cars race cars.

We also have a Goofy that matches the Mickey. We gave him the matching Donald last year right after we bought them as he loves Donald Duck.

We've had quite the little winter storm here...most roads are shut down and a lot of people are stuck on the roads in freezing temps with no relief in sight.

Thankfully we have been home all day and DS got to enjoy his first snow. 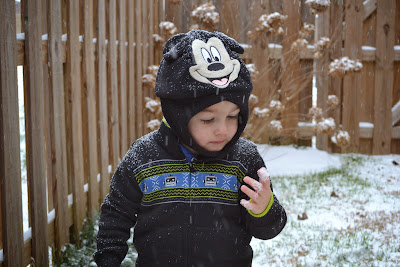 theBIGyowski wrote:We've had quite the little winter storm here...most roads are shut down and a lot of people are stuck on the roads in freezing temps with no relief in sight.

Thankfully we have been home all day and DS got to enjoy his first snow.

Forgive me for being mildly amused at how a couple inches of snow shuts everything down.

So sweet, did he enjoy the snow?! He looks like he's investigating it in that photo!

he loves the snow...just doesn't like when he gets too cold

And yeah...it's a bit humorous how crazy it gets when it snows just a little. The problem is we only get snow maybe 2-5 days out of the entire year...and even then it rarely sticks to the roads. The recent frigid temps meant anything that fell stuck immediately and turned to ice. Combine that with hundreds of thousands of people leaving work to go home or get kids from school...and it was a recipe for disaster. We weren't supposed to get anything more than flurries...so everyone was at work and school when the roads started getting iced over. Even in all of the chaos...our southern hospitality shined through as fast food restaurants have been handing out free food and drinks to motorists stuck in the cold and have even invited people to sleep in their restaurants where it was warm...feeding them for free as well. Hotels let people sleep in their lobbies and hallways for free. A lot of warm hearts here in 'Bama...and sometimes it takes things like this for everyone to see them.

Wow...so I somehow forgot to add pictures from February and March. DS is becoming more of a "boy" every day and is growing like a weed. We're working on planning for his second birthday, which will be a Toy Story themed party. I'll upload a picture of the invitation I created here in a minute. 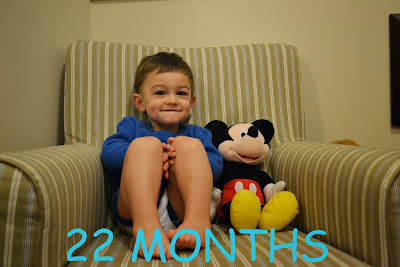 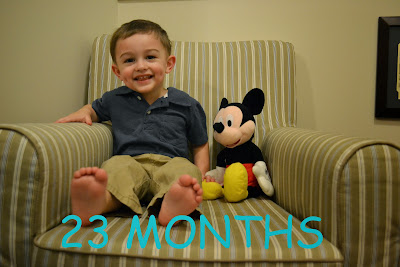 Here is the invitation I made for DS's 2nd birthday party. It took me a while to get everything right...and surprisingly I was able to do it all in Microsoft Word. It's crazy that I can do more with Word than with Photoshop. 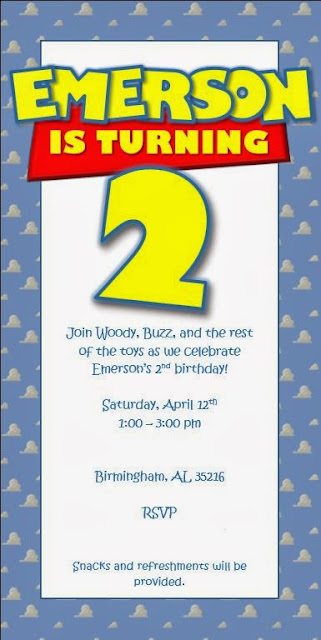 Of course we sent an invitation to Mickey & Minnie. We also sent one to Woody and another one to Buzz.

He is still very cute, but definitely more of a little boy now than a toddler. Cute invitation to his party! That will be interesting to see if you get something back from Mickey & Minnie and Buzz and Woody!
Top

Hey Big, what font did you use for Emerson's name? I love the invitation! Nicely done.

Oh, I forgot to ask...how is potty training going for the big boy?
Top

Amy wrote:Oh, I forgot to ask...how is potty training going for the big boy?

Potty training is going well. He is doing a good job of running to his little potty when he needs to use it. He just has accidents every now and then...and we went to pull-ups in the meantime because he never could tell us when he needed to go to the potty. I think by going to pull-ups, it also makes him feel like he can use the bathroom in the pull-ups when he doesn't remember to run to the potty. So, he's making progress and we're hoping he will be out of pull-ups before Summer.

cy1229 wrote:Hey Big, what font did you use for Emerson's name? I love the invitation! Nicely done.

Don't need to remind you what an adorable little boy he is. Wow, such a cutie. Definitely needs major hugs!

The font that Pixar uses is Gill Sans Ultra Bold. They then take that font and stretch it a bit. I didn't have the time/energy to convert each letter to an image...to then start stretching them. So I just went with the basic font. In Word, you can give the letters a nice outline, which I did to match the Toy Story font. In Photoshop, the outline feature like that does not exist, which is why I said it was easier to do this in Word than Photoshop. Now, the nice thing about Photoshop is that you can put anything anywhere you want, whereas Word tries to arrange things for you and prevents you from being able to freely place things on the page. The "Is Turning" part, which is normally "STORY" is the same Gill Sans Ultra Bold font, but inside of a whacky red shape. Again, Word has the ability to draw shapes, then manipulate them, and add text on the inside. After that, I added a bevel to the shape to give it depth. Then I added a shadow to all of the text and put the "2" on top.

I thought it turned out great. The blue clouds in the background is just an image I found online. Word has a "Page Color" option where you can make your page a certain color...or you could select an image or pattern. I used that cloud background image and then put a white rectangle on top of it. So like I said...lots of work...but it ended up being what I wanted it to be.

Now I just need to come up with decoration ideas. We already know we will use some of his toys as decoration all over the house...and a friend of mine who makes cookies is going to make THESE for DS instead of us doing cake. DS doesn't really care for cake but is crazy about cookies. I have thought about putting up some blue bulletin board paper on one of our walls in the living room...then adding the clouds on it to look like Andy's room. Of course we will have Toy Story or Toy Story 2 playing on the TV. If anyone has any ideas just let me know.

Those cookies are cute! I'm sure you've thought of checking it out, but here is a link to the Disney Toy Story crafts and recipes page http://family.go.com/disney/pkg-disney- ... toy-story/
Top
Post Reply
500 posts