I am Sulley wrote:Fast Pass selections made.
I suppose we just sit and wait now. Gosh that makes it sound so boring

But its not! We are starting to get just a little bit excited

Our tickets and luggage labels have arrived!!!

I am Sulley wrote:Our tickets and luggage labels have arrived!!!

It's like we're all going on vacation with you virtually!
No one's gloomy or complaining while the flatware's entertaining.

Enjoy the trip. It's going to be fun!
Top

Enjoy the trip. It's going to be fun!

I am Sulley wrote:1 week away

Looks like shorts weather to me! Although you might want a light jacket for the evening. How do you prepare for the long flight? Or are you used to sleeping on the plane by now?
Top

Just got back this morning

Had a couple of hours sleep to try and compensate for the jet-lag. I find it difficult to sleep on a plane but my wife did have a few hours.
As Christmas is just a few days away I don't think I will get around to doing any reports until after the festivities not to mention the 2000 ( yes! two thousand) photos I have to sort through.

There is however one thing I can say now :

We had the most wonderful time

So glad you had a nice time and made it back home safely ~ will be looking forward to seeing some of those 2000 photos after the holidays!
Top

Amy wrote:So glad you had a nice time and made it back home safely ~ will be looking forward to seeing some of those 2000 photos after the holidays!

At last started to sort the photos!
Unfotunately my wife was quite ill with the flu for two weeks over Christmas. She has still yet to see the photos herself.

Hopefully will get a report going soon
In the meantime here is a taster taken shortly after we arrived.
[url=https://flic.kr/p/21ANsog][img]htt ... .jpg[/img]Disney's Beach Club Resort by wdw1998, on Flickr[/url]
Top

Nice! Hope your wife is on the mend. There are a couple of horrible strains of the flu and a few other sicknesses making the rounds here as well.
Top

Ok lets try and get started

Day 1 Tuesday 5th December
At 11.00 as we were called to board our flight I remarked to my wife "that we had been up 6 hours and were still only 40 miles from home"
"If we take off the time difference we will be in Florida in less than six hours" came the reply. I liked that postive view of our holiday

Take off was on time and using the in flght tracker 4242 miles would see us land at Orlando International Airport at 3.30 slightly early.
We paused in the Airport atrium to admire the impressive Christmas Tree before making our way down to board our "Disney's Magical Express" coach. The first call was the Caribbean Beach and catch a view of the redevelopment work. We had stayed here before so it was quite a shock to see the entire Barbados area demolished to make way for the new building. Leaving here should be just a short hop to the Crescent Lake Epcot resorts. Now I am a stranger but my memory from previous visits told me we should have turned left not right. Then as we approched the next junction a last second lane change saw us make a left. As we passed Port Orleans Resort I knew we had gone wrong! At this point we turned left into Best Friends Pet Care to turn around and head back!
Several minutes later we passed Caribbean Beach again before dropping off at Boardwalks and then round to the Yacht Club Resort - At last!

What a beautiful Hotel! 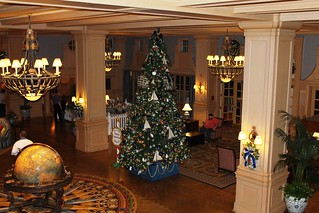 We checked in, up to our room and then off to explore.
After examining the model railway in the lobby we made our way to the Beach Club Resort to see the Carousel. Wow this was something and the smell of Chocolate fills the air. I had to restrain my wife from taking a nibble 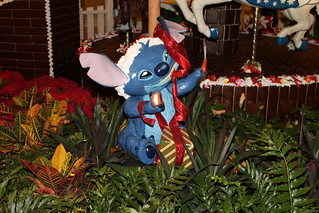 Stepping outside we decided to take a walk around Crescent Lake. In the warm night air we strolled round to the Boardwalks letting the WDW effect take over our minds. This was a lovely setting, watching some street entertainers and enjoying the view back to our hotel. 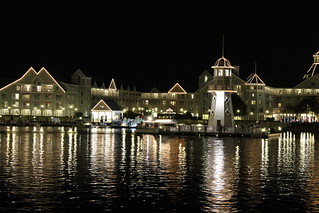 Disney's Yacht Club Resort by wdw1998, on Flickr
We paused on the bridge opposite the Dolphin Resort to watch Illuminations but decided that we were tired. We had been up now for over 21 hours. It was time for bed. In our room we heard the fireworks before falling asleep.
Top

Very nice start ~ We looked around the Boardwalk a few trips back when connecting through to another park and it looked very pretty all decorated for the holidays. Looking forward to hearing and seeing more from your trip

After a good sleep we had breakfast in our room our usual juice & cereal which we had bought the night before.
Our morning was at Magic Kingdom where we could soak up the atmosphere and get into the Christmas spirit. We arrived just as the Move It! Shake It! Street Party was starting, having enjoyed this from our previous visit it was good to watch again, yet sad that it is scheduled to finish soon. We had Fastpasses for two of our favourites, Jungle, oh sorry, Jingle Cruise and Buzz Lightyear's Space Ranger Spin. The jokes on the Jingle Cruise were even better/worse? with a seasonal theme and we were impressed at the way the whole ride had been dressed up for Christmas. 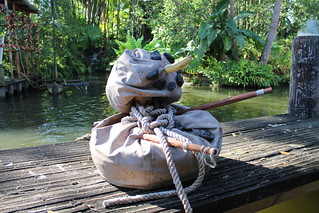 Jungle Cruise by wdw1998, on Flickr
Crossing the park to Tomorrowland we paused to watch the end of Mickeys Roayal Frienship Faire, we would see this in full later on the holiday. My wife just loves the shooting rides and once again had the higher score to take an early lead in our holiday challenge.
A quick lunch at Cosmic Ray's Starlight Cafe, yet more bad jokes!, before finding a good spot at the top of main Street outside Casey's Corner to watch the Festival of fanatasy Parade. I just love the Parades, they are always a highlight for me, I could watch them over & over again. 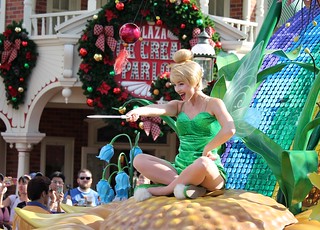 Festival of Fantasy Parade by wdw1998, on Flickr
After a leisurely departure from Magic Kingdom via a few shops we caught the bus back to the Yacht Club to get changed for our evening meal at Cape May Cafe. This was on our list of must do's as we both like our seafood - We were not disappointed. Crab legs, Salmon, Clams, Shrimps, Chicken and lots more. Gorgeous! I would recommend this if you like seafood.
One of the reasons behind our choice of hotel was its location and closeness to parks and entertainment. So after dinner we walked into Epcot to watch Illuminations. Now unfortunately a little bit of a cold snap was rolling in with rain forecast. Although the rain held off it turned quite cold and even though we had our fleeces on we could feel the temperature drop. Fortunately only 10 minutes after the fireworks we were in the warmth of our room listening to the heavy rain which had just started as we got back, hoping it would clear for tomorrow.
Top
Post Reply
87 posts