When you meet those Chipmunks they always give you a lift

especially when one is so pleased to see you. And you're right cy we really needed it with the way things were going

Santa Fe, sadly, didn't even feel like a budget hotel and with the noise which I guess was possibly a rough old boiler, it seriously needs a shake up
Top

Plaza Gardens is DLP's version of Crystal Palace at the top of Main Street. With a similar style Buffet at last we were able to have a good meal, our first in two days. Taking our time, we really enjoyed it and felt ready for the afternoon. Exiting once more into the rain which was now quite light we decided to explore the Park as we had just over 2 hours before the Parade.
We headed across into Frontierland, we had wanted to do Phantom Manor but already knew this was (and still is, at the time of writing) closed for refurb.

Through Adventureland into Fantasyland where I had to agree to join my wife on Le Carrousel de Lancelot, she just loves these. At this point the rain had actually stopped

We then opted for "it's a small world" I have to be honest here and say this was better than WDW it seemed brighter, happier and more colourful - if thats possible! 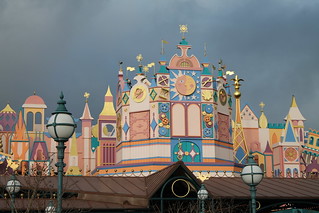 There was just time for a quick look around Discoveryland before returning to take our place near to the gates where the Parade starts. The weather was getting better all the time with the clouds starting to lift hopefully the light would be OK for the late afternoon parade.
With great anticipation for the final float we enjoyed "Disney Stars on Parade" as it passed by. Then one of the proudest moments of our lives as Anna spotted us and gave us our own little show as the Frozen float crept past us. We could even lip read her telling Elsa "That's my Mum & Dad there" I don't mind saying we wept a few tears as children called out to Anna. That was our Princess up there 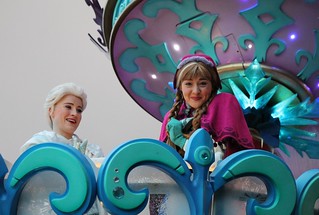 As soon as the float had gone we headed around the back of the Central Plaza, down Main Street behind the crowds to Town Square by the parade exit gates. As if reserved for us there was a space right near the exit. Within minutes we watched the whole parade again and with the light now fading as the clouds started to gather again we were able to have the final wave off Anna.
Leaving the park as light rain fell again we made our way to wait at the World of Disney store for our Princess.

As a thank you for coming she had booked us into Buffalo Bill's Wild West Show. She texted to tell us to go in as she may be cutting it fine to get there. You are warned that this show is not suitable for allergey or asthma sufferers - this includes my wife

She had taken her medication and had her inhaler with her. However the smell hits you within seconds of entering. Despite having to use her inhaler my wife just managed to get through, but only just, so be warned.
However this is a great show with the arena split into 4 teams with everyone given a cowboy hat with colour band on. During a cowboy style dinner a bit like the Hoop-De-Do you are told the story of the settlers in America with real cows, buffalo(sadly now retired) and native Indians. Then the fun starts with the Cowboys and Indians competing in events aided by Disney Characters. On this occasion our team won and they then needed four volunteers to help take the gold on the Stagecoach. 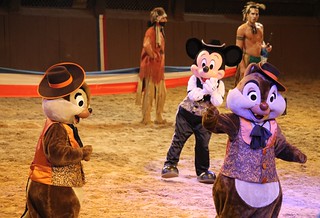 Yes, Princess got picked to play the part of the damsel captured and rescued from the Bandits. You would have thought she had just won an Olympic Medal.
She was so pleased.

After the show we all returned to Hotel Santa Fe before Princess took the bus and headed home.
This time as my head hit the pillow "Oh the peace". We slept well
Top

Aw, what a lovely day ~ I love the picture of your Princess on the float!
I didn't realize they had such a big dinner show at DLP. Looks pretty neat, but I can see where it would not be a good thing for those with asthma.
Top

Our Princess was joining us for most of today so we decided to spend it in Walt Disney Studios park. At last it had stopped raining and although quite grey it was not too cold as the wind had dropped. Hooray an improvement in the weather! We had plenty of time so decided to walk having a look at several of the other Hotels on the way. It is only about a mile anyway.
We met outside and entered the Front Lot, this time we were able to take a look around at the Star Wars fighters above our heads. There was only one showing of Moteurs...Action! and this fitted in neatly after our Lunch.
DLP Studios like WDW Studios in not very big and with the Studio Tram Tour closed

we set about seeing what we could fit in.
Princess recommended Ratatouille so that was first whilst it was still quiet. This is a great ride with the cars moving about in different directions, the effects are excellent and fun and oh boy the smell of the freshly baked bread......mmmmm, heaven!
One of the best rides ever, we all agreed. 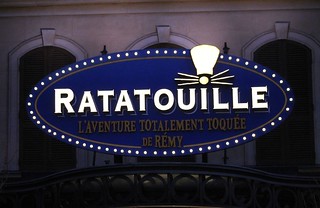 
Continuing to explore - the SUN came out. Wow! but we headed indoors into Stitch Live! an interactive show (Monsters Inc. Laugh Floor style) where unfortunately one of the guests was not very happy at being picked out, this only made Stitch pick on him more. Naughty Stitch

We had lunch booked at Restaurant Des Stars, another American style buffet, with some desserts to die for. On leaving the sun had gone never to be seen again.
The next major highlight of the day was Moteurs...Action! The spectacular car and motorbike stunt show including a guest appearance from Lighting McQueen. 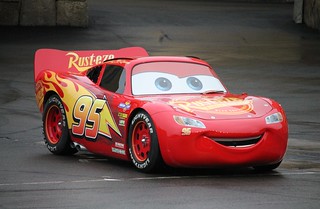 
We did Armageddon (disappointing) and Art of Disney Animation either side of watching "Star Wars: Season of the Force" remarkably similar to "Star Wars: A Galaxy Far, Far Away" that we had seen at WDW only a few weeks earlier.
As the light faded we said goodbye to Princess for today so she could pack the suitcase for us for tomorrow. We had basically done all in the park we wanted but were staying for the Star Wars light show.
What could we do to fill our time?.... Ratatouille! Doing this ride again was even more fun as each car takes a different path so you actually see and experience the scenes from new angles and can get even more Champagne sprayed on you. Oh, did I mention the smell of the fresh bread? No? The smell made me hungry just time to grab a quick Burger in the Front Lot food court before taking up our spot for Star Wars.
This is literally the Star Wars story played out using projections onto The Twilight Zone Tower Of Terror accompanied by lasers and Character appearances on the forecourt stage. We loved it 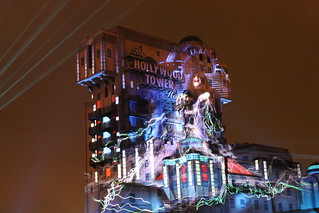 Making our way back through Disney Village we explored some of the shops but as the rain returned we had to get the bus back to Santa Fe. Despite the weather our early disasters no longer seemed to matter.

Another nice day ~ I've watched the Ratatouille ride on youtube and it looks like great fun. I wonder how closely the EPCOT version will be?
Top

Amy wrote: I've watched the Ratatouille ride on youtube and it looks like great fun. I wonder how closely the EPCOT version will be?

I do hope that it is similar because as you may have noticed we liked it, particularly the bread

So this was our final day and the rain continued. We checked out of Santa Fe and headed to meet Princess with our suitcase delivery. She was on a late so took us to DLH left luggage to leave things to collect later (free of charge to Cast Members

)
We had the morning together so went into the Main Park and luckily the rain stopped. 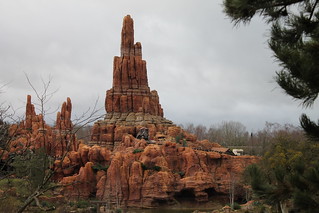 We explored Frontierland and took in Big Thunder Mountain, quite different to WDW as tunnels take you to and from the island most of the ride is set on. The park was quiet so we managed Snow White - Scary! and Peter Pan - lovely!. We had a chance meeting with Rapunzel who Princess knew - of course! 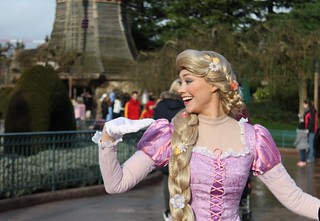 There was just time to fit in my wife's favourite. Yes Buzz Lightyear Laser Blast, however on this occassion we had an expert with us. Princess won easily with my wife last. She claims the pressure of a third person got to her. I'm saying nothing.
Lunch for the three of us was at Plaza Gardens again. Princess had only ever been a Character there so wanted to try it to eat. Just as our 2nd day we enjoyed it especially the desserts 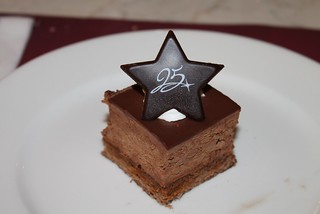 After lunch it was time to collect our bags and say our goodbyes before boarding our train back to the UK. As we changed stations in London it was raining again, luckily our other daughter was waiting to collect us in Liverpool.


I will give my overall thoughts on DLP shortly
Top

sounds like a lovely last day, other than the dampness. Guess that is the chance you take when you go during the winter months.
Top

That's a nice end to a fun trip. So glad the weather cooperated on the last day.

I know you had connections for luggage storage for free at the hotel, but I think DLP has luggage storage at the main entrance. Not sure if it's free though.
No one's gloomy or complaining while the flatware's entertaining.