Ah, I can see that. I think it is so open though that all that wood doesn't feel too much for me ~ or at least it didn't when we popped in there to have a look
Top

It reminds me of the Old Faithful Inn at Yellowstone National Park (which it's supposed to do, I think). I love that old place so maybe that's why I love the look of Wilderness Lodge. Haven't forked over the big $$, though, to stay there. Maybe one day but my girls aren't big on returning to Disney any time soon. They have other places they want to go first.
Polynesian 1980
All-Star Movies 2001
Pop Century 2008
Saratoga Springs 2010
Bay Lake Tower 2012
Hyatt Place Anaheim Resort/Convention Center 2015
Marriott Anaheim Suites 2016
Top

For some unexplainable reason Animal Kingdom had ended up at the end of our holiday again. I really don't know where Animal Kingdom fits in to Disney. There is nothing particularly wrong with it, just to me it doesn't seem to fit

Another confession here. Until two weeks before we left we had not seen Avatar

We only watched it then because of our trip, we did however enjoy it. I am not quite sure why to some people it is so popular but then we are all different. It was good that we had seen the film or Pandora may have completely passed us by. The effects for the World of Avatar scenery are good and this new area is fun, if a little busy. 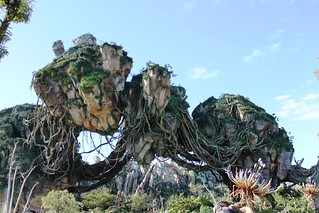 Our first Fastpass choice was for the Na'vi River Journey which is a beautiful boat ride true to the film, pefect for my wife. We even bumped into, literally, Warwick Davis and his family on leaving as they were being escorted onto the ride via the exit.

As I said I don't quite get Animal Kingdom, so much of our day was spent wandering around simply enjoying the sights.Wait times were generally long and unless you have booked then I don't think there is much worth queueing for 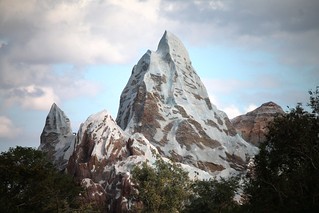 Lunch was booked at The Rainforest Cafe. Quite an experience if you haven't done it. No complaints, food was good, but I doubt I could become a regular.
The absolute must for us at AK is Kilimanjaro Safari. It is good to see the animals like that even if there are hidden fences. We had done the other big rides previously so had kept our 3rd Fastpass for Rivers of Light. With a bit of time to spare we ventured into Dinoland. With only a 20min wait time I persuaded my wife that Dinosaur would be Ok. She survived

We got a seat on the third row back for Rivers of Light which was perfect. I would suggest that you don't sit any lower. We did enjoy this show and the water projections were my favourite. 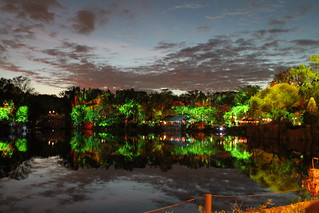 . Maybe that's why we leave it til last, it just doesn't excite the same as other things Disney.
We got back to the Yacht Club and had a sandwich in the Market at Ale & Compass before sitting on the Crescent Lake Pier to watch Illuminations for the final time. Tomorrow was our last day

I still haven't seen Avatar, but will do so before my next trip for sure. It always helps when you have a little background I think. Mom and I watched Cars for the first time on our trip out to Cali when it was our first trip to Carsland. So neat to see how they make the movie come alive.
Hmm, Animal Kingdom was always one of our favorites, but maybe it is because we love(d) animals. One of the highlights was always the safari for sure.
Haven't been to the Rainforest Cafe in years. We found the food to be too expensive and just ok so we almost always ate at Flame Tree Barbeque in AK ~ the chicken and ribs meal was big enough to split and for each of us to still feel a bit stuffed.
She survived

But will she want to go again?
I'm so looking forward to seeing Rivers of Light at some point ~ thanks for the tip about seating

Amy wrote: Hmm, Animal Kingdom was always one of our favorites, but maybe it is because we love(d) animals. One of the highlights was always the safari for sure.


Sorry Amy. It's not that we don't like the animals. Goodness I see Rhinos, Elephants & Monkeys everyday now in my new job

AK just doesn't seem to have that Disney sparkle like everywhere else. Maybe that's the point because it is a bit more serious with the animals etc. That said we could never miss it out and the Safari is pretty good
Top

I am Sulley wrote:Sorry Amy. It's not that we don't like the animals. Goodness I see Rhinos, Elephants & Monkeys everyday now in my new job

AK just doesn't seem to have that Disney sparkle like everywhere else. Maybe that's the point because it is a bit more serious with the animals etc. That said we could never miss it out and the Safari is pretty good

I can see that ~ and I am quite envious that you get to see all those animals now! AK is definitely more understated than the other parks. I do feel they did a good job of making you feel transported, especially in the African sections of the park

So sadly our last day arrived.
With nothing planned we took a morning stroll around the Yacht Club and Beach Club taking in all the Christmas decorations, after all it was only 10 days away. We bought a few last souveniers in the Beach Club shop before taking the bus to Magic Kingdom. We had decided to go there as heaven knows when we might return. One last farewell to the Castle seemed the right thing to do. 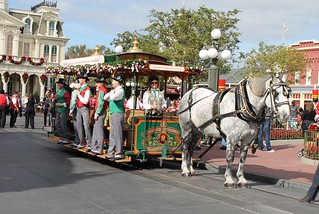 Magic Kingdom by wdw1998, on Flickr
We entered the park just as The Dapper Dans were performing in Town Square. Our Princess would love to do that show.

Now where was that Main Street Bakery we were going to have one of those large Cup Cakes each that we had said no to several times. My wife chose a beautiful Belle one whilst I went for the full Christmas one. (I discovered later the green frosting has a strange effect on you!) 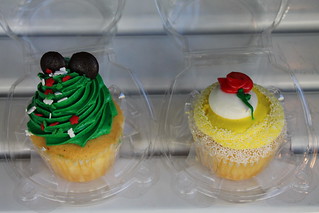 We had some nice photos taken with the Castle on our PhotoPass before a very final chance to watch the Move It! Shake It! Parade.
The decision was to spend time revisiting our favourite parts of Magic Kingdom, Adventureland and Frontierland.
We walked onto Swiss Family Treehouse and spent some time enjoying the elevated views across the park before descending to walk straight into the Tiki Room. To me this show is as bizarre as "it's a small world" and has that same strange addiction and haunting musical effect... altogether now Ohhhh the Tiki Tiki Tiki Tiki Tiki Room......!
The park was quite quiet so we had time to complete the clockwise circle through Fantasyland into Tomorrowland before calling into Cosmic Rays for a late lunch.
Reluctantly we left for the bus back to the Yacht Club 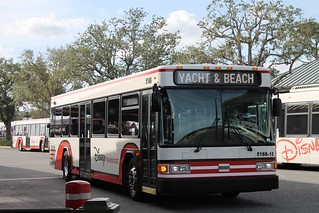 Collecting our luggage and changing into more appropriate clothing for the weather that awaited us. Our flight was to be overnight but we arrived in Manchester almost an hour early to views of the remains of the snow that had hit the Country in our abscence.
Welcome Home!
Top

Sounds like a lovely last day. I'm a bit curious on that green frosting effect ~ something digestive perhaps?
Top

I would like to say thank you to everyone who helped with tips in the planning of our trip. This was intended to be a special holiday and the suggestions given helped us have a truly fantastic time. Maybe our thoughts have helped others plan their own trip.
Thanks also to all of you who have followed my trip report, which although it took some time helped in keeping the memories alive just a bit longer. Somebody did suggest that you were on a virtual holiday with me, well, hopefully you enjoyed it. I'm glad you tagged along.

As I have said elsewhere the events of this summer has changed our lives abit so I have no idea when we can get back, if at all, but I do have a report to do for a wet January at DLP, hope to get this done soon.

Oh my goodness, looking forward to the DLP report! Such a pretty park

Thank YOU for sharing with us!!
Top
Post Reply
87 posts